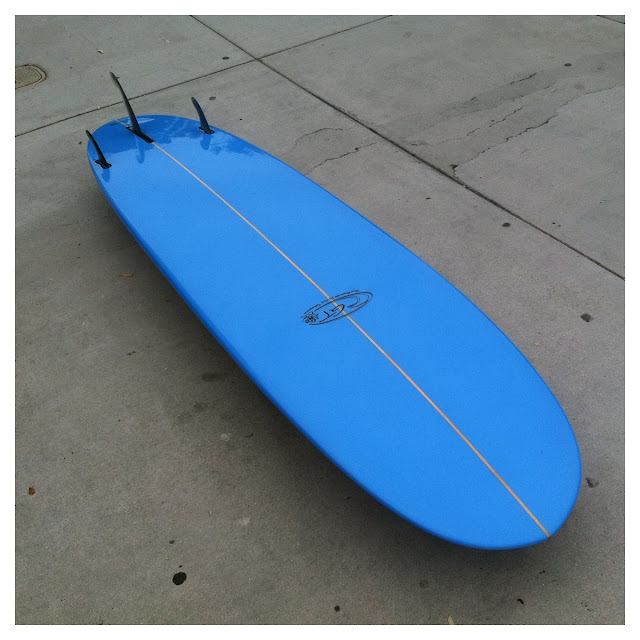 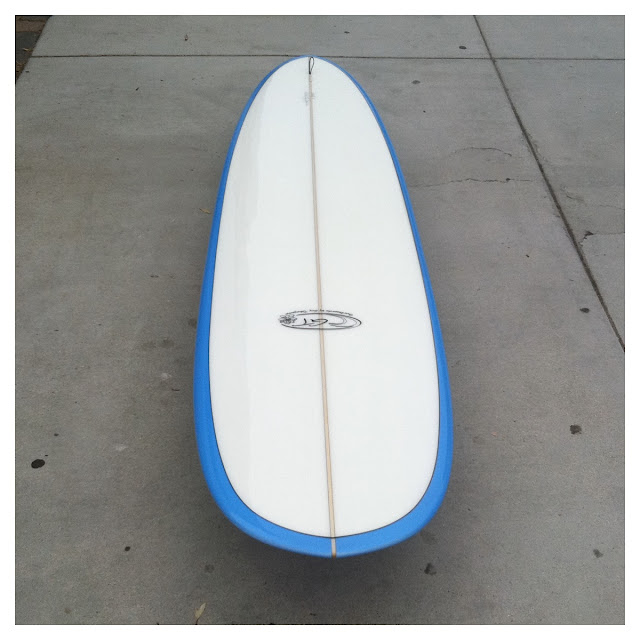 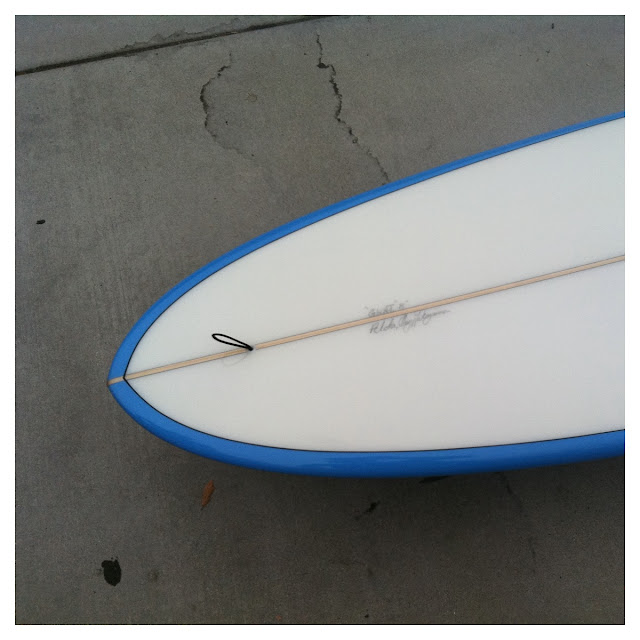 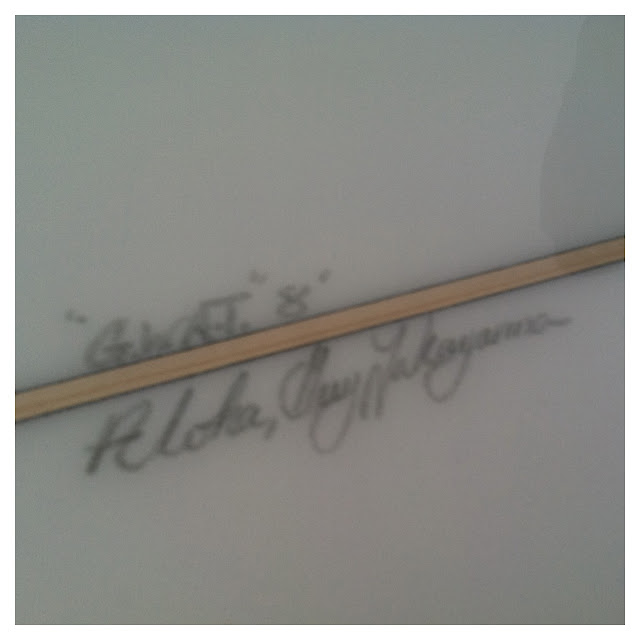 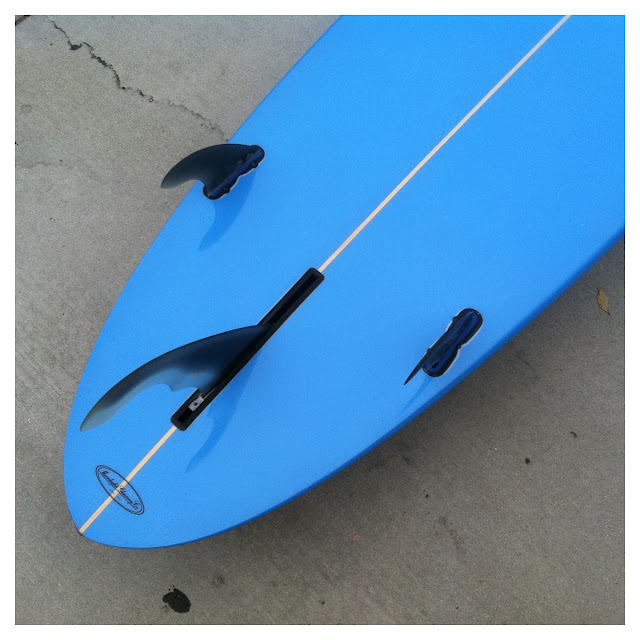 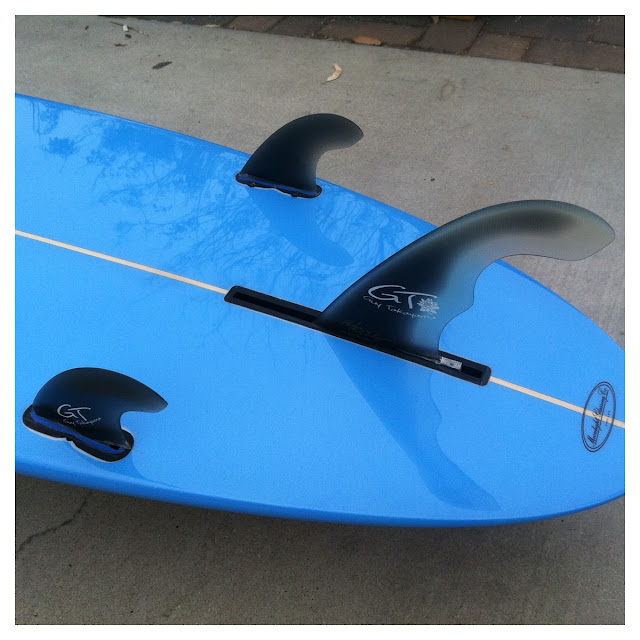 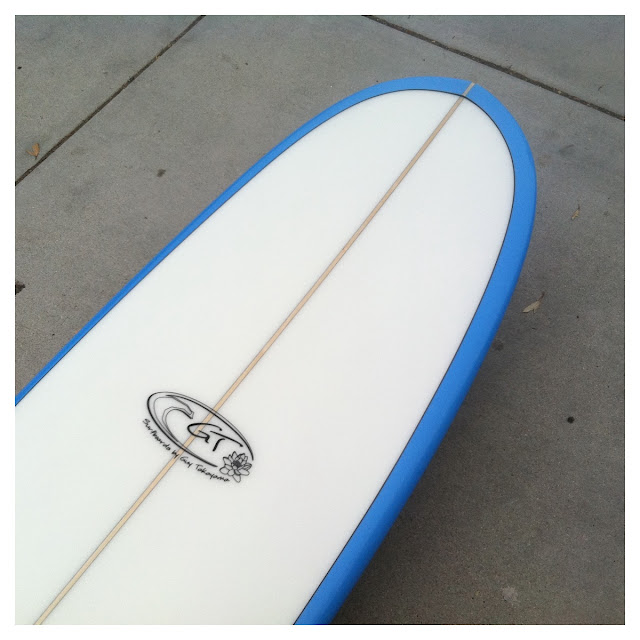 Look, it’s a 8’0″ GWAT! Which is pretty big for a GWAT which is like a longboard, but smaller (if you follow that logic).
Shaped by Guy Takayama for Surfy Surfy.
8’0″ x 22 7/8″ x 3″
The GWAT comes with custom G.T. fins by Fibreglass Fin Co. that fit the standard center box and Probox system sides.
6/4 oz glassing, airbrush bottom, gloss and polish.
See also: Case Study Surfboard: The GWAT
*this board is SOLD, thanks!

Part 1 of new series on essential Case Study surfboards that make up the Surfy Surfy quiver. 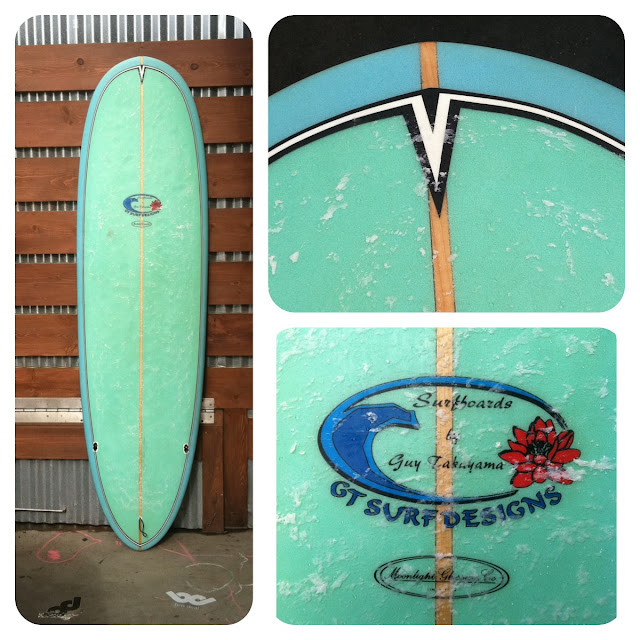 Custom shaped for me by Guy Takayma in the summer of 2001. Guy shaped the original GWAT for personal use, got stoked on it and then had it scanned at KKL. The KKL software allows for perfect scaling of this design from 6’6″ to 8’0″.

Concept is a mini longboard. Works in beachbreaks, works extremely well in points. 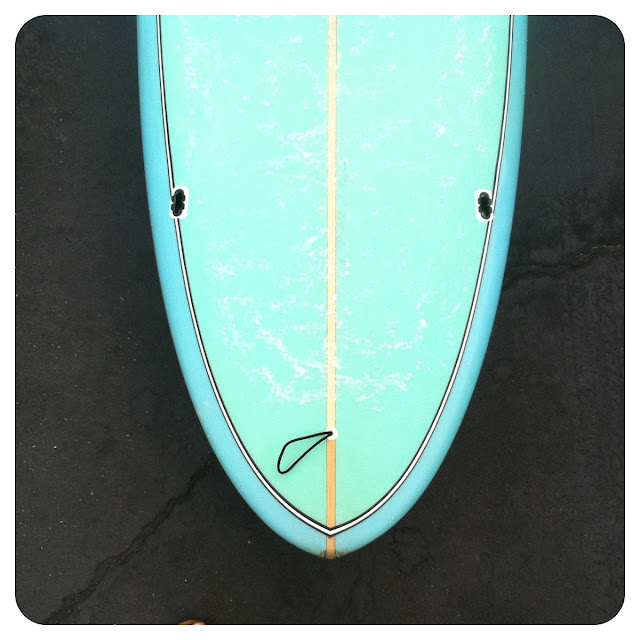 Shaped out of a Clark Foam blank which has held up extremely well after over a decade of heavy usage.
5/4 oz glassing deck, 5 oz bottom by Gary Stuber at Moonlight Glassing.
Airbrush and pinlines by Peter St Pierre. The green and blue theme is inspire by the color of the 55 gallon resin drums the surfboard industry gets from Revchem Composites. 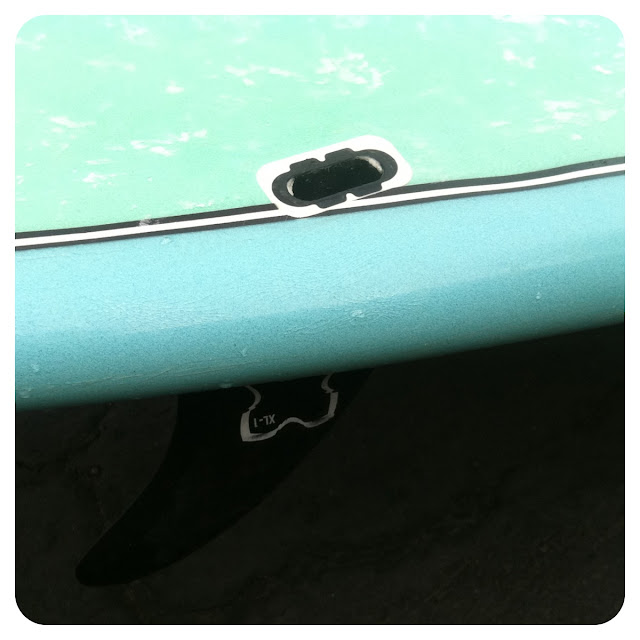 The side bite fins are the Red-X fin system, which is routed all the way through the board. The fin is screwed in from the deck. Red-X is a extremely strong system, however it is important to cap the deck with a piece of cloth during build, which few in the industry did, therefore killing the system in the long run. As far as I know Red-X (previously called the Excel system)  is now defunct.

*note-if you need fins for an old board with Red-X Surfy Surfy can special order them for you. We got a hookup. 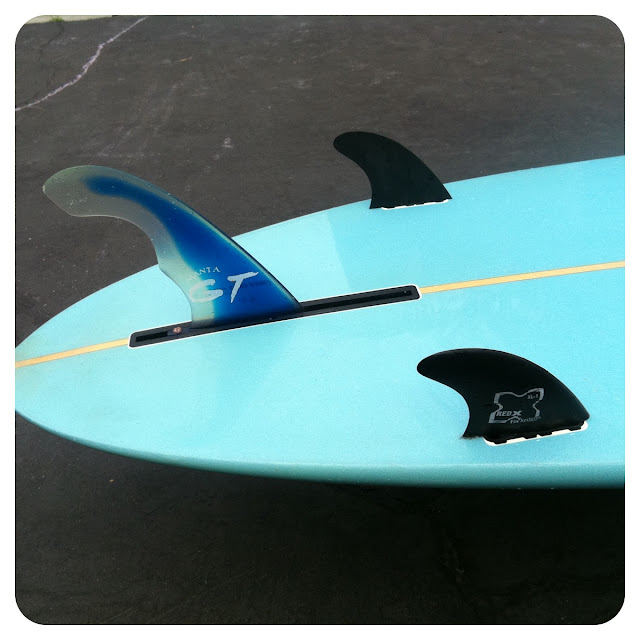 Current center fin is 6.5″ GT Manta, normally ridden with the 7″.
The side fins are not the GT template. Those were donated to a customer 7 years ago.
Gloss and polish finish (this board is another example of why gloss coats are important to longevity). 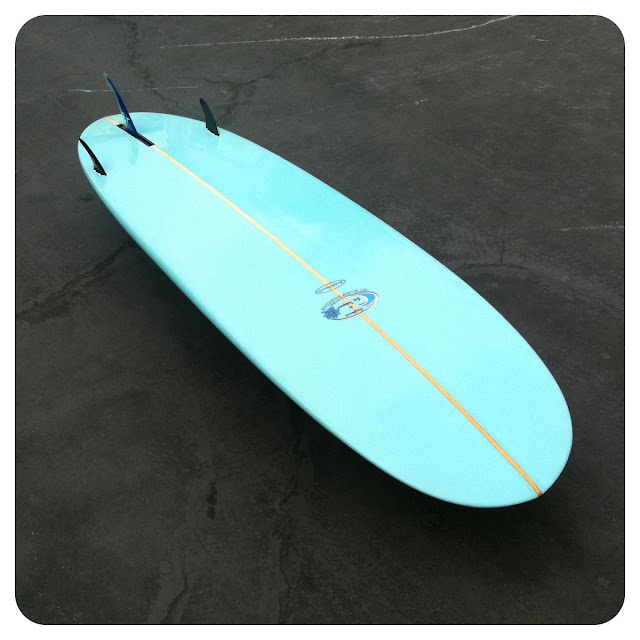 This board is a Hang 5 machine! Slight nose concave. Hang 10’s could be possible for a more skilled surfer than myself.

Maggie Marsek Rhyne snapped these Hang 5 shots on the smallest non-wave day ever.

Excellent paddling, fast down the line and nimble weaving thru crowded lineups. Easy flowing cutbacks. Not a retro flashback dog. I also call this board The Slump Buster because it’s a good board to ride when things aren’t going well.

Leash worn only on occasion. It’s taken some lumps, lost it on the rocks in central California 6 years ago being the only real damage which was minimal and easily repaired.

The GWAT is often compared to the Donald Takayama Scorpion model (Guy’s uncle). The GWAT has more hip and more nose rocker and more shortboardy rails than the Scorpion.
This board has been loaned out to dozens of surfers of all abilities and has been a favorite to push kids and spouses into waves on.

Once widely available, Guy is currently only shaping GWATS in limited quantities these days. Surfy Surfy tries to keep them in stock, but they sell quick. Average retail on these boards is $950.00 which includes custom fins from Fibre Glass Fin co.
New GWATS feature the Probox system for the side bites.

It’s a testament to a board when it’s stayed in rotation for over 10 years and hasn’t been sold. 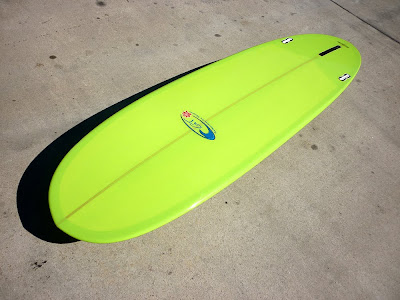 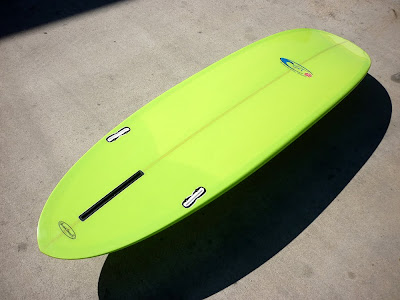 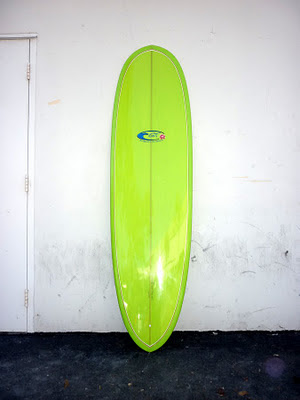 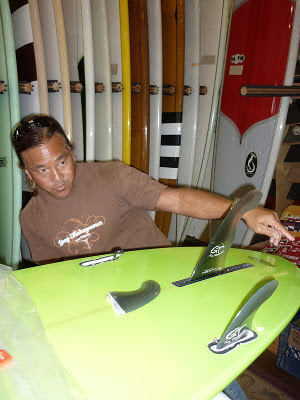 Throughout the first decade of the 2000’s Guy Takayama was shaping these incredible surfboards called “GWATS”.

Ranging from 6’6″ to 8’0″ the GWAT contains speed, flow and wave catching abilities. You can hang five on these puppies, step back and throw down a wrapping cutback.
It’s like a super nimble mini-longboard.
Surfy Surfy and Guy have brought the GWAT out of hibernation. We are now accepting custom orders for GWATS. Pictured above is our first custom, a 610″ with groovy lime green resin tint.
Standard GWATS have a 2+1 setup with Guy’s “manta” fins.
The GWAT is a staple part of the Surfy quiver see photo
Inquiries email us at orders@surfysurfy.net
or call 760-452-7687
Surfy Surfy Online Store! The shop plumerias Guy Takayama gave us are having a nice year, producing full bouquets. Stoked! Guy Takayama’s pro noseriding event is happening this weekend at the Oceanside Pier. This little twin fin fish featuring a Dick Dale portrait by Wade Koniakowsky will be actioned off for charity. I believe that Dick Dale is playing a free show there this afternoon.