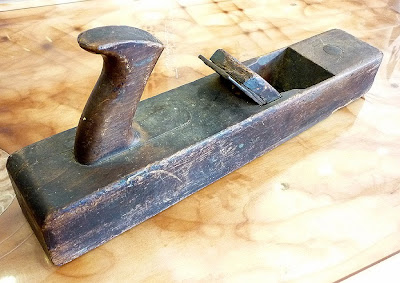 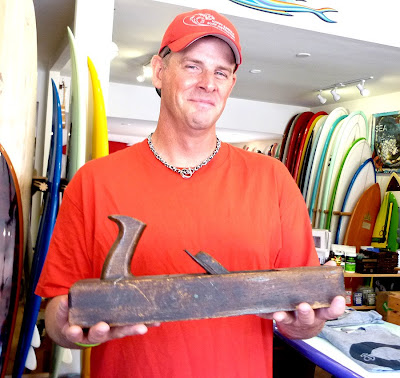 Robbie Nelson is the founder of the Adaptive Surfing Foundation, a surf school that specializes in taking disabled and severely wounded people surfing. He stopped by the store this week with a special gift for my dad Peter St Pierre of Moonlight Glassing. It’s a handplane from the 1800’s. Read what Robbie has to say about it:

When we were living in the Northern New South Wales area, my Dad had this handplane in the tool shed for a long time, taking it out only for projects around the house and sharpening. Yet whenever my grandfather would come over, they would go to the makeshift shaping bay in the barn and make boards out of whatever wood they could gather-mostly balsa but I have seen them use gum tree wood as well (with often dodgey results with gum though).

The plane actually belonged to my grandfather but everyone would use it for various projects but often failed to sharpen the blade when they returned it, which bloody aggravated the old man so he stashed it in our tool shed.

Grandpa (or “Anvil” as he was called by his mates, apparently he was a boxer in his day) was on hand on December 23, 1914 when Duke Kahanamoku made a surfboard out of Sugar Pine and went surfing on a at Freshwater Beach in Sydney. Apparently Grandpa Crawford was hooked because he immediately went and sourced out the necessary tools and timber to make surfboards.

Regarding the plane itself, my Grandpa bought it second hand (source unknown) but it is believed that it came from England via sailing vessel before the turn of the 20th century and has been in the hands of dozens of sailors, carpenters, farmers and surfers for over a hundred years prior to arriving arriving in your shop.

Note: it does NOT work with foam. Tried it, total disaster.