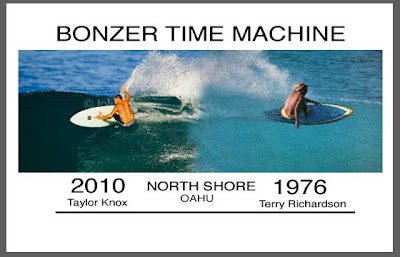 Via the Campbell Brothers:

December 2010 marks the 40th birthday of the Bonzer. For Duncan and I to be sitting here having to correct another ‘surf historian’ is both ridiculous and fitting. Fighting revisionism is a long term project in all fields of endeavor. The subject of record this time is Matt Warshaw’s “The History of Surfing.” We have not read the entire book, nor are we likely to. Our point of contention deals specifically with the entry involving the history of three finned surfboards. To be fair to Mr. Warshaw, and to show that we are not taking him out of context, here is the pertinent section in its entirety.

“The most distinctive feature of Anderson’s new board was a stabilizing third fin placed behind the side fins, on the stringer, just a couple of inches from the back end. Three finned boards were not unheard of: Dick Brewer, and Reno Abellira of Hawaii had designed a version in 1970 that featured a regular sized middle fin flanked by a pair of half moon “finlets’’. Two years later Malcolm and Duncan Campbell, teenaged brothers from Ventura, California introduced a design called the “Bonzer”(Aussie Slang) for great, with deep concave channels on the bottom, a regular center fin, and a pair of long keel like side fins. The Brewer-Abellira tri-fin never caught on. The Bonzer was hot for a few months then disappeared. Then eventually came back as niche-market favorite.”

First of all the basic factual errors in this paragraph could have been avoided with a simple Google search and trip to our web site, or better yet a look at the original documents.

read the rest of History is Not a Rorschach Test and learn the facts at Bonzer5.com

*Blogger’s note-I got my first Bonzer 5 fin in 1990. I was was 20 years old. All my Bonzers were modern performance shortboards until around 2005 when I started discovering the updated “retro” templates. Thanks to Malcolm Campbell for shaping me all those magic boards all these years.

Check out my Hipsters

I got to visit the Fins Unlimited kitty today… @