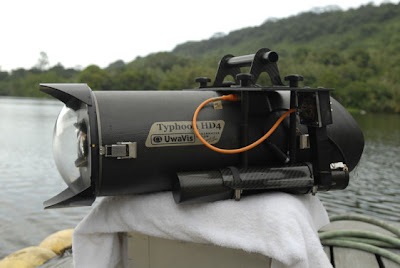 This incredible super slow-mo HD surf footage has been making it’s way around the interwebs this week. A nice girl named Jenny from a professional viral marketing firm sent me this email,

The clip is an extract from a six-part series called South Pacific, being broadcast on BBC2 from Sunday May 10th 2009 at 20.30 in the UK. HD super slow motion video of big wave surfer Dylan Longbottom in a 12 foot monster barrel – the first shots of their kind ever recorded.

* The $100,000 high speed camera used to film this surf sequence can operate in super slow motion and high definition at 20 times the speed of a normal HD camera. The camera is a TyphoonHD4 which has been specially modified by the BBC Natural History Unit in Bristol, UK, and is similar the the one used on previous BBC landmark series such as Blue Planet and Planet Earth. It required a special housing unit designed and built by German specialist high speed cameraman/technician Rudi Diesel. Until this film no one had ever tried using this type of camera underwater before

Watch the footage in large format on YouTube here.