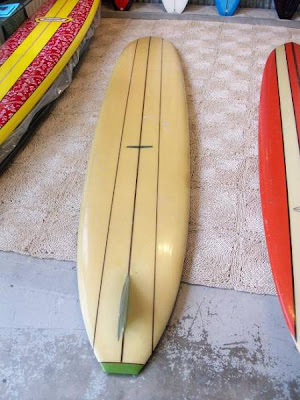 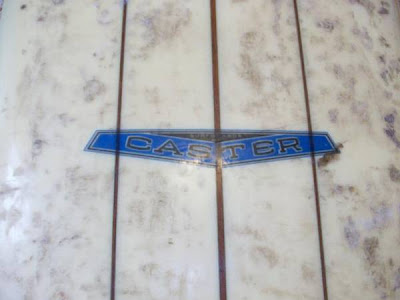 The following was posted by “anonymous” in the comments section of this Surfy Surfy post.

I have a rare board my dad gave me after he passed away… It’s a Caster. 1965 was the year it was shaped, shortly after Caster made this board he left to go serve the country in Vietnam. #1143 is the number inscribed on the middle stringer. It’s obviously a tripple stringer, weighs 38 pounds, in mint condition. I recently have paddled it out and it is truly amazing to surf such an old board… to think of surfing a board when at the time it was made, there was no such thing as a wetsuit… This board is awesome… it turns great for a single glassed in fin… I have learned alot about Caster after my father passed away in January… My dad surfed this board in high school, he graduated in 1966…. He went into the airforce after high school and slowed his surfing down tremedously as he raised a family and started his career… The last time it was in the water was in 82 at Sunset Cliffs. I was on a boogie board, only 7 or 8 years old, following my dad on this classic board…. Now I surf it. It’s crazy, but it is in flawless condition. It stokes me out to just drop in, make the turn and sit back and enjoy the ride…! Cudos to Caster and his family… what a great person. I’m proud to have legacy board from a time of one of the Great Shapers in San Diego!

AB3 on your TV

Did you know that the color gradients in the Surfy